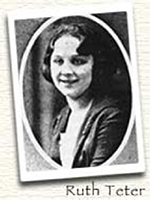 Teter Family Retreat, located at 10980 East 221st Street, Noblesville, is a ministry of Noblesville First United Methodist Church. The property was acquired in 1981 from Ruth Teter, an interested and active member of the church. As a girl, Ruth enjoyed living on this 120-acre farm along the White River. Her father, Arza, and mother, Ada, were well known and respected in the Noblesville community.  Ruth’s older brother, Earl, earned a wide reputation as a stunt driver with a group called “Lucky” Teter’s Hell Drivers. He was killed in an accident in 1942 in what was to be his last performance before he was to join the Army during World War II. Ruth was an excellent piano player and accompanied several musical groups. She worked for the Central Engineering Co. of Indianapolis for many years rising to the position of Secretary-Treasurer. Upon Ruth’s death on August 12, 1981 this farm was left to Noblesville First United Methodist Church to be transformed into a retreat as a memorial to the A.W. Teter family.

In 2015, the idea was born to expand the retreat facility’s purpose to include an organic farm, as a community outreach ministry to feed spirit, mind and body. Learn more about the farm at www.TeterOrganicFarm.com 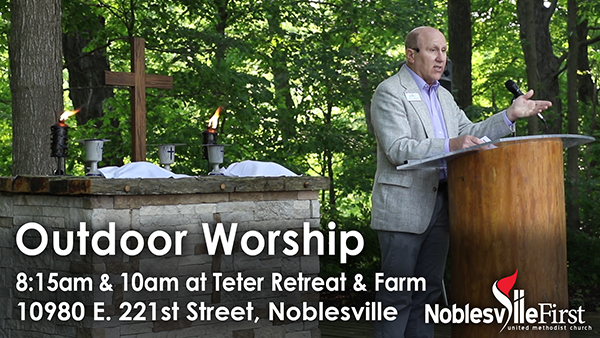 Sit on one of the socially distanced benches in the outdoor worship area, bring a lawn chair, or listen to the FM broadcast of the worship from your car (available only on the Teter Retreat grounds). In the event of inclement weather, worship will be available via Facebook only.

Looking for a unique setting for your next event?

Located on the scenic White River in the heart of Hamilton County, Teter Family Retreat provides a rustic backdrop for a variety of event planning needs. The facility can host gatherings, ranging from a few hours to a few days, including outdoor weddings, corporate outings, community group meetings, personal and group retreats, family reunions and scout troops.

Facilities and amenities include: